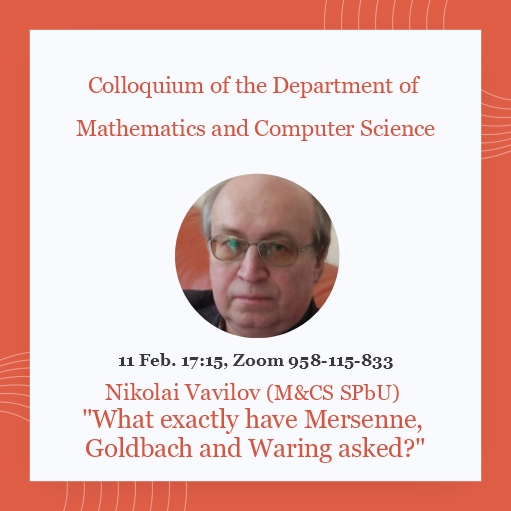 Colloquium of the Department of Mathematics and Computer Science

Colloquium of the Department of Mathematics and Computer Science

“What exactly have Mersenne, Goldbach and Waring asked?”

Yuri Manin observed, that mathematics is not a text. Only occasionally do mathematicians look into classical works, to verify what exactly was said there.
Mostly, they are quite happy with the myths created for specific purposes and self-replicating after that. For obvious reasons, this applies in particular to the famous classical problems. I discuss the original statements of three such problems, by Mersenne (and Catalan), by Goldbach and L. Euler, and by Waring and J. Euler, themselves. It turns out that in all three cases the highly acclaimed XX century solutions were solutions of different questions. The original Waring problem was indeed solved, not by Hilbert in 1909 though, but mostly by Dickson and Pillai in 1936. However, the definitive solution of the case of biquadrates, explicitly stated by Waring himself back in 1770, only came in 1984, and would be impossible without computers. Odd Goldbach, as stated by Goldbach in 1742, was indeed solved by Helfgott in 2014, and again heavily depended on the use of computers. In my talk I plan to survey the major mathematical and computational challenges resulting from the original statements of these problems, as also from their XIX and XX century versions.

Other news
Student school in School in Algorithms, Combinatorics, and Complexity
“Quantum Toda lattice as a сhallenge to Representation theory”
“Sharp inequalities on BMO-space and the Bellman function”
Minicourse “Geometric flows of networks”
A New Life of the Old Sieve
Thematic program “Geometric and Mathematical Analysis, and Weak Geometric Structures”