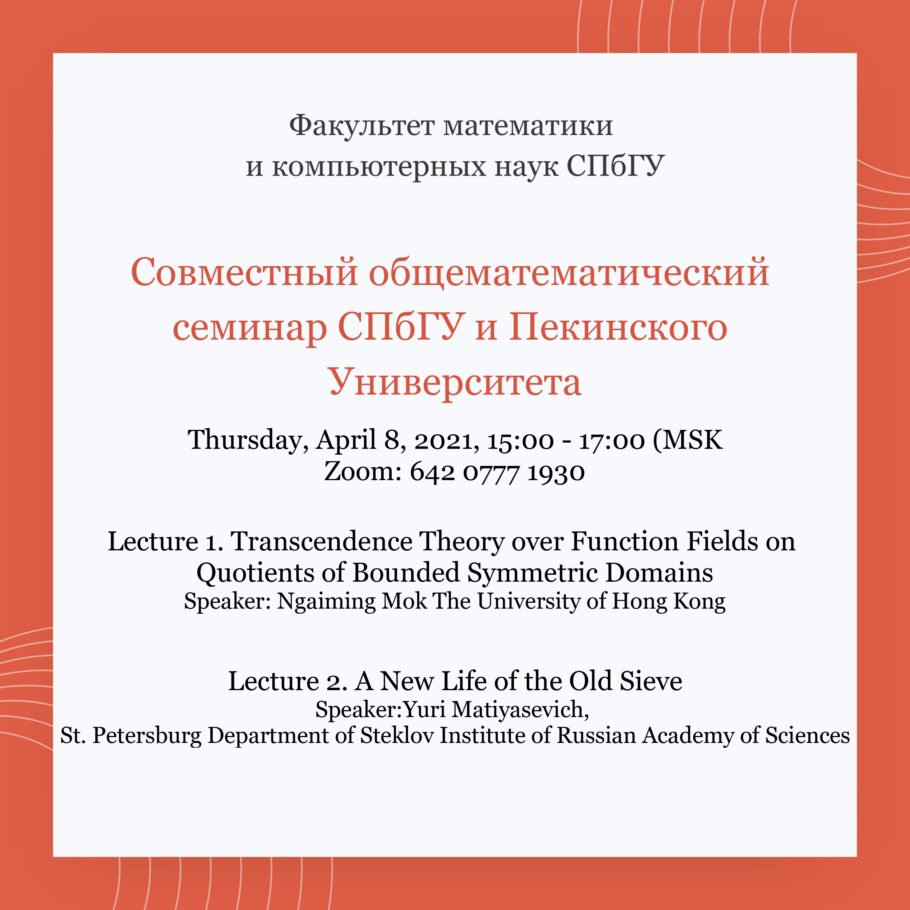 Abstract: Finite-volume quotients of bounded symmetric domains Ω, which are naturally quasi-projective varieties, are objects of immense interest to Several Complex Variables, Algebraic Geometry, Arithmetic Geometry and Number Theory, and an important topic revolves around functional transcendence in relation to universal covering maps of such varieties. While a lot has already been achieved in the case of Shimura varieties by means of methods of Model Theory, Hodge Theory and Complex Differential Geometry, techniques for the general case of not necessarily arithmetic quotients Ω/Γ =: XΓ have just begun to be developed. For instance, Ax-type problems for subvarieties of products of arbitrary compact Riemann surfaces of genus ≥ 2 have hitherto been intractable by existing methods. We will explain how uniformization theorems for bi-algebraic varieties can be proven by analytic methods involving the Poincar´e-Lelong equation in the cocompact case (joint work with S.-T. Chan), generalizing in the absence of the emisimplicity theorem of Andr´e-Deligne for monodromy groups (proven for arithmetic lattices). Klingler-Ullmo-Yafaev (2016) resolved the hyperbolic Ax-Lindemann Conjecture for Shimura varieties in the affirmative ascertaining that the Zariski closure of the image π(S) of an algebraic subset S ⊂ Ω under the universal covering map π : Ω → XΓ is totally geodesic. I will explain how the arithmeticity condition can be dropped in the cocompact case by a completely different proof using foliation theory, Chow schemes, partial Cayley transforms and K¨ahler geometry.

Bio: Professor Mok is Edmund and Peggy Tse Professor in Mathematics and Chair of Mathematics in the Department of Mathematics of The University of Hong Kong (HKU). Since 1999, he has been Director of the Institute of Mathematical Research at HKU. After obtaining his Ph.D. at Stanford University in 1980, Professor Mok started his career at Princeton University and was Professor at Columbia University and at Université de Paris (Orsay) before returning to Hong Kong in 1994 to take up a Chaired Professorship at HKU. He was a Sloan Fellow in 1984, and he received the Presidential Young Investigator Award of the US in 1985, the Croucher Senior Fellowship Award of Hong Kong in 1998, the State Natural Science Award of China in 2007, and the Bergman Prize of the American Mathematical Society in 2009. He is a Fellow of the American Mathematical Society. Professor Mok has been serving on the Editorial Board of Mathematische Annalen since 1992 and he was on the Editorial Board of Inventiones Mathematicae from 2002 to 2014. He was an Invited Speaker at the International Congress of Mathematicians (ICM) in Zurich in 1994 and a Member of the Fields Medal Committee for ICM 2010 in Hyderabad. Professor Mok is an Academician of the Chinese Academy of Sciences and a Fellow of the Hong Kong Academy of Sciences.

Lecture 2. A New Life of the Old Sieve

Abstract: Prime numbers are one of the most important objects of study in Number Theory. Greek mathematician Eratosthenes (276—194 B.C.) invented a method (known nowadays under his name) for revealing primes among all natural numbers. A more modern and powerful for tool for studying prime numbers is Riemann’s zeta function. In recent years the speaker performed intensive computer calculations in the search for new properties of this function. Unexpectedly, the Sieve of Eratosthenes naturally appeared in one calculation with the non-trivial zeros of the zeta function. This form of the sieve demonstrates a rich fractal structure lacking in the original sieve. Later another calculation revealed a different kind of a sieve which is dual to the classical Sieve of Eratosthenes. So far no theoretical explanation was found for the observed phenomena. Calculation were not an easy computational task. They required calculations of several thousands of initial non-trivial zeros of the zeta function with several thousands decimal digits, and solving systems consisting of several thousands linear equations.

Bio: Professor Matiyasevich is one of the most renowned contemporary Russian mathematicians and President of Saint Petersburg Mathematical Society. In 1966, at the age of 19, he obtained some breakthrough results in logics and presented them in ICM of that year held in Moscow. In 1970, Yuri Matiyasevich solved Hilbert’s Tenth Problem. By now, he has got a wide range of breakthrough results related to other classical areas e.g. four colors problem and Riemann’ s problem. He has got a big number of prestigious awards including the Humboldt Prize, the Markov Prize by Soviet Academy of Sciences and many others. He has got Honorary degrees at Universite d’Auvergne Clermont-Ferrand and Pierre and Marie Curie University. Acad. Prof. Matiyasevich is a member of AMS, Bavarian Academy of Sciences and many other scientific communities. Yuri Vladimirivich Matiyasevich works at Petersburg Department of Steklov Mathematics Institute since 1970, and he became a professor of Saint Petersburg State University in 1995. Since 2002, he has been a head of Saint Petersburg City Mathematics Olympiad. In 2008, Prof. Matiyasevich was elected as a full member of Russian Academy of Sciences. Academician Prof. Matiyasevich raised a big number of talented students, among whom there are several professors and academicians.

The announcements of the two lectures can also be found on the webpage:
http://english.math.pku.edu.cn/conferences/245.html